sailed 7989 for the first time in breeze - though the water was fairly flat.

Oh my oh my, once the monster kite is up and pulling that really is something else.

With a South Easterly blowing straight up southampton water, we did from Hamble to weston in two legs with just the gybe to slow us up for a moment. Am not allowed by law to really express what was said on the boat at the time, suffice to say that we were somewhat impressed.

7989 may now be an old lady, sailed by two old men - but I've sailed far newer rondars and they have been nowhere near as stiff.

Interestingly, there was a classic Fireball out last night as well enjoying the champagne conditions.... will try to get him hooked in to the CVRDA too.

I have a feeling fireball 6 is at Netley cliff and one other early one as well.
Hornet 191 Shoestring,
Hornet 595 Demon awaiting restoration
Hornet 610 Final Fling
Hornet 353
Top

nearly came to a cvrda event once....actually maybe it did.....?

the one last night was not that old (but still classic) - I do not think you'd have taken no 6 out in those conditions - shades of the Netley Nationals!

Netley Cliff is something of an anomoly - I used to be a member there before moving along the shore when dinghy sailing died there. I have a sneaky feeling that they have two real oldie f'balls, plus a Kestrel dating back to the early G M Gmach days (the grp in the stern is about 3/4" thick).

I tried hard to get them to come to Netley last year but.... maybe all those Finns put them off!

They were put off by the one Finn you mean? They really are big girl's blouses then aren't they?
PeterV
Finn K197 & GBR564
Warsash
Top

One Finn is enough to have other sailors running for cover........

One Finn is enough to have other sailors running for cover... 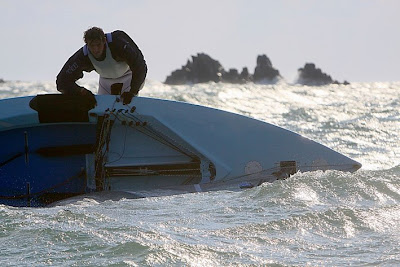 Hi All
Fireball no 6 sailed at Brightlingsea and won. This boat was raced in the orginal style of the design no trapeze or spinnaker transom mainsheet. The boat had a three new heads and four new shafts look about it and would have stood up to a good blow because of this. For a Fireball it was a nice job ( shoot me an Ex Horneteer saying such a thing),. Mind you as I get older there is a definite attraction to arm chair sailing in a Fireball or Davids borrowed 505 fastest arm chair in the world.
Cheers Al
Top

you are in the queue behind Roger "Nice boat you've got here...opps, I broke it" Deveraux.

The five o, being a woodie, has the side decks built like a double chine and I have to say, is comfortable and kindly to an old man's legs.


Good Art seems ancient to its contemporaries, and modern - to their descendants. — Plutarch

David,
Neil Drew will be sailng a classic Finn at Roadford when you visit and is still regreting the sale of the 505 but he wil be backed up by the posiility of at least eight other Finns by my calculations, so I would be wary of rubbing it in.
Great to hear its going so well, its nice to see a classic that is still capable of giving the current boats a run for the money.
GBR74 ex custodian of
GBR384 Mickey Finnale (Taylor,wood)
GBR455 Rubber Duck (Taylor, grp)
FD GBR350 Supercalifragalisticexpialidocious
Top

The crew on the other hand, although old enough to be classic twice over - may not be in the 'cutting it' cateogory!

But who cares when one can have a sail like the one the other evening!!!

7939 is a Rowsell Morrison from 1987. Another 3 years and she qualifies for the CVRDA

The boat is of course 7939 but it matters not for she is for sure a classic (even though there will be some who say 'not yet').

At the 505 Nationals the boat attracted a degree of interest far beyond it's position in what was a highly competitive fleet. It was the only boat with any wood on show - all the rest are now high tech frp. When the tallies were handed out, we were given number 1 - the next earlist boat was 81XX. The issue with 505s is not dissimilar to that with the Phantoms.
Around the early 8400s, the hull shape as changed to a flatten rocker, with a fuller bow (yes I know the 505 is a one design.... now you know why Smods are ruling the roost when things like this happen) which in effect made all boats pre that day pretty much back of the boat park fodder. It has got to the point that the Class Association do not even charge owners of pre 8400 boats full price for membership!

So how did the week fare? Started badly, with me having two Shreddies for breakfast and thus pulling the spinnaker turning block out of the hog. IN doing so I fell backwards, landed on the tiller and snapped the tube cleanly off, about 2" from the rudder stock. All this was with the monster kite up in a good F5..... and NO...kept it upright but needed to change the wetsuit later that day!

After that....well, as Brooksey explained when the deal on the boat was done, the mast was like a pre-EU banana, the spare was in the official 'naff' category. No problems for a pair of ex 505 sailors.... whatever happened to that Proctor D that didn't go to the Worlds in 1981? There it is ...lashed to a telephone pole. It may have scrubbed up okay but 'soft' is one word that springs to mind. When helm and crew are both carrying many more kilos than they did the last time they raced 505s, something with a bit more stiffness would have been nice (Mr Briggs MD....can you prescribe for that these days?). So we ended up sailing well, but slowly! There were moments of glory, when people with recent new boats had to wait until the last lap to get past.... sometimes not even then. A lot of laughs though and ample evidence that the 505 is a wonderful boat to sail out at sea.

As for the FDs (no Brooksey...... dead oh dear...we'd have sailed your boat for you) there was only one woodie present in that fleet, a Bob Hoare Cold moulded hull that had celebrated it's 30th birthday just the week before!.

Rather than just witter away... there is a moral to the story. We all have our own views on SMODS and how they have 'damaged' the world of dinghy sailing but there is of course another perspective to be considered. Those classes that we know and love (and yes, I will include the Finn here) have been pretty good at playing the one design card, then allowing hull developments through that make whole legions of boats obsolete. Who is to blame for this? The builders..... the IYRU (now of course badged as ISAF).... the sailors themselves?

Yes David but not all the Smods are equal re weight and stiffness of spars/foils just test a few you will soon find out.
Called down to see you at Torquay yesterday only to be told that you had gone home early and wasn't even present at the prize giving. Nice to see a certain Mr. Pinnell being presented with another 505 trophy as he has in recent years been the yardstick that you measure your standing against in the 505. Saw the small huddle of FD sailors in the corner. Toby Barnsley -Dale lifting the trophy at the last minute from the claws of that other old Hornet reprobate Strangler.
Cheers Al
Top
Post Reply
43 posts