The name 'Sven Thorell' recently cropping up in another thread has made me wonder whether any CVRDAers or their friends understand Swedish? I have a document, written in Swedish by Sven Thorell, detailing his preparations for, and reflections upon, the 1928 Olympics where he won a gold medal sailing an International 12' Dinghy.

It would be nice to get this document (4 A4-sized pages) translated, as it certainly deserves a wider audience............


And here's my Sven Thorell designed sailing canoe, built by Nunn Bros in 1926

That would be much appreciated, Neil. I will scan and email the document very soon!
Steve
Steve Crook
Int. 12' Dinghy - NED486/SUI-4 - Einepyk
Top

What a beautiful boat!! Any more info/photos? Is it sailable?
Top

Zenith is currently in my boat shed and requires a total restoration. She was found in a field in Scotland in the 1990s and has a very interesting history

In 1935 she was adopted as an IC even though she's a 'B' class canoe and doesn't have a sliding seat. Originally she was yawl rigged but at some point was converted to Bermudan rig.

After WW2 she was owned by Barry Bucknell and I had a great conversation with his widow about their adventures in the boat. In the 1950s she was owned by Micheal French. I was lucky enough to track track Michael French on the day of his retirement from Reading University and he put in in contact with Ron Head who photographed the ICs in the 1950s and 1960s. He let me have copies of all the photos he had of Rannoch (my 1947 Uffa IC) and the only photo of Zenith 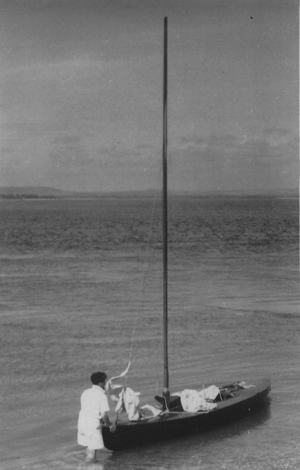 I was given Zenith when I bought Rannoch and at some point she has been dropped onto a trailer putting two holes (about 8" diameter) in the hull. A previous owner was a old chap who just screwed ply over the holes and sailed her until he was too old to sail, she was then left open in a field.

Luckily Nunn Bros built her from Hondourous Mahagony so despite being open to the elements she's sound (apart from the holes!) and importantly the hog, keel and centreboard case are sound. She needs reribbing and redecked. I've found she has mast supports under the deck for the yawl rig so she's going to be returned to the original rig. I have copies of the lines plan, contruction drawings and original sail plan.

When I got her home I phoned a contact in the hardwood trade and explained I want some Mahagony. He phoned around and found a 13' * 13" * 4" plank of Hondourous Mahagony in a Scottish timber yard, they'd had it since the 1940s. The plank is now safely stashed in Devon and will be more than enough for the planking. The oak ribs are tiny and there's a lot to replace.

So....she's now completely dry and ready for restoration and will finally get into the workshop this year (after the Solo and Elvstrom Finn are finished and Rannoch gets a coat of varnish(or 7) in time for the Nationals). This is one project that won't be rushed, there's probably a years work to get her on the water. Now I have the plans and contruction drawings she's going back to original - white painted hull with pine decks covered in canvas.

I am looking forward to seeing her on the water.

That's an amazing story and one that I think would make a lovely article! The best bit of all this is the 'life story' of the boat...... plus the characters that have sailed it.

This is one of those all too rare occasions when you do not have to look for an angle before starting writing... the boat itself IS the story!

Can't wait to see that afloat, even better, would love to have a short sail.

You 'l be interested in the comments I'm about to post on the other string - the one on charting dinghy history.

With a house move happening soon, I'm planning the continuation of Zeniths restoration (especially as for the first time I have a heated workshop). Currently in the looking at and thinking stage of what order to do things in. Still need to replace 80+ ribs and 10' of planking, but thought I'd have a dig around online. I have a set of photocopied lines of 'Sol' (I think Zenith is based on the Sol design) from the Thorell collection in the Swedish Maritime museum and have been keeping an eye on their online presence.

Hit the jackpot today, they've been very busy digitizing their collections - and they have a fair bit of the Thorell collection available, and they are using a CC license.

Collection is available at http://digitaltmuseum.se/info/owners/S-SMM-SM

Thorell collection is at http://digitaltmuseum.se/search?query=sven%20thorell