Here's another small dilemma, I know much is discussed about varnish and varnishing but here's the thing:
My 14 is made of two opposed diagonal skins of very narrow mahogany planks 20-30mm wide.(there is no oiled cloth between but the inner skin is tongue and grooved and in many places the groove has been broken away) The whole thing is very dry and is surely a sieve in the shape of a boat. I want to swell it up and have tried an area by just sponging water on, as it is bare wood it takes up and swells well. I would like to swell it up before I varnish so that gaps between the little planks are not just filled with varnish first as this could cause a bursting effect when the wood does eventually take up moisture.
I intend to ask some of the varnish manufacturers how dry/damp timber can be before the varnish can be successfully applied. But how dry do you thing wood should be for varnish?
I would rather not use the G4 type of product here but it would have one very good advantage in that it actually needs moisture to cure it so the timber could be wetter than it should be for varnish. So it remains under consideration.
The last problem to consider is that there are at least 7,500 holes in the hull (from copper nails) I have had to splice a few repairs in and much of the mahogany is good but cutting through, even with a scalpel, just where the copper nails go through shows that for about 1-2mm around the hole the structure of the timber has degraded nearly into crumbs. It wont cut but just crumbles. I doubt if the holes would now tighten onto the nails but could just act as a conduit. When I started this project I decided that it was not desirable or realist to reskin the hull and that it would probably be necessary to use some modern techniques and products. Much of the boat has come out better than I expected and hope to keep it as traditional as I can.
What would you do?
Top

Sounds like maybe you need to waterproof the boat with something other than varnish? If you used cuprinol or similar, would the wood then be able to soak up whilst still being dry enough to varnish once the surface was dried?

Or there are water based external varnishes, too - Burgess certainly used to make one. Trouble is, I don't think they are either very pretty or durable.
Rupert
Top

I would consider the Owatrol Deks Olje treatment.

D1 is the first coat, lovely stuff, you slap it on, wet on wet until the wood can't take any more, it really soaks in while wet then dries off.

D2 is the finishing coat. It makes a high gloss hardish finish which if fine.

If the wood is prepped well then you'd don't really need to sand between coats.

You can use a nice trad varnish instead of D2 if you want to, think Epiphanes etc.

Why? Because D2 is very slippery when wet.

The beauty of all this is that it is easy to maintain, read up the blurbs and have a look.

The D2 instructions say that it is not to be used below the waterline. If you read the small print on a normal tin of varnish it surprisingly says the same but I am assuming that the boat does not live on a mooring.

Well, others may disapprove but I've done this and so far, so good!

Michael
Tideway 206
11+
Sold the 'Something bigger and plastic', it never got used.
Top

Interesting. I have a similar problem with my Uffa Fox 14 (I think it inevitable in these boats where the old membrane has disintegrated). Total immersion slows it to a controllable level but I am tempted to try the Owatrol Deks Olje D1 treatment you suggest for a more permanent solution. I had never heard of the stuff before but I had a look at the web site and it sounds promising. Before i start stripping the boat I do however wonder how permeable 75 year old Honduras mahoghany will be to a treatment of this sort. Does anyone else have experience with this?
Top

Deks is certainly a thought. I have used it once a long time ago on an Edwardian punt. It certainly does penetrate and although I liked the look of the part 2 varnish it wasn't as tough as I expected so wouldn't use the part 2. I have also used the method of mixing linseed oil and turpentine on another boat, and found that just as good but it took a long time to dry, probably a few drops of terebine would help...but then all it is really is dilute home made varnish (well nearly). So maybe coats of very dilute varnish is just about the same thing. It accepted varnish on top perfectly well.
My other thought is that I really need to swell up the timber first before it gets 'set' with any oil based products and reduces the swelling effect. It is all very dry and with gaps upto 1mm between the hundreds of small planks. It does swell when wetted as I have experimented with that.
I also experimented with a piece of the planking I had to replace and tested with the cuprinol wood hardener. It does certainly put strength back in soft timber and it is certainly weather proof (my partly rotting garage door was treated a long time ago and I haven't touch up the paint yet and it is still good and solid). But it has waterproofed it and so I don't think the timber would be able to absorb moisture and swell now.

Some one else has suggested a water based varnish as a primer. I could then swell the wood first, let the surplus dry off, then use the water based stuff which should be happy with damper timber. There's some logic there and I might experiment first. But I haven't yet looked into what products may fit the bill.

It does make be think of a preservation method I saw at the maritime museum in Poole. A dug out log boat was found in the silt (boat is over 1000 years old) instead of the very expensive technical method used to preserve the Mary Rose to replace the water logged into the timber they preserved it with sugar! The idea being that the sugar crystallises as it dry out to support the cell structure of the timber. I guess that's another reason why swelling up the timbers of a boat is best done in salt water rather than fresh water. Apart from the preserving nature of salt, it probably reduces the amount the timber swells and shrinks as it soaks and dries compared to pure water. The extremes are meant to be about 1/16th inch in one inch (that's between bone dry and water logged)
Top

If it helps, Rannoch had Desk Olje on the hull 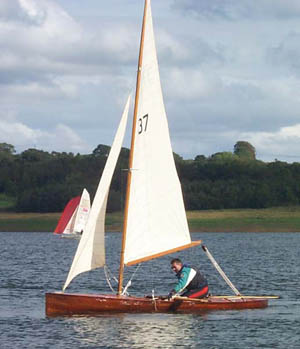 I'll try to dig up and post some pics of D1 and D2 being used on a completely dry (unsailed and indoors for at least 8 years) mahogany Tideway.

Chris has a point about the 'softness' of D2 so maybe D1 followed by varnish is the best way to go in areas of high wear and tear.

If you had asked the question in twelve months time I would have been more knowledgable.