Having seen these at work this year I was wondering what they were. Are the something sophisticated or are they something like this running perhaps off a small motorbike battery? I'd guess that it would only really be on for 50% of the time?

Those of us who have elderly clinker boats might be tempted by such a labour saving device in the first month or two of the year, after which our boats are supposed to take up...
Tideway 206
11+
Sold the 'Something bigger and plastic', it never got used.
Top

I've got three on my narrow boat (which I just sold as it happens) and they shift a lot of water. But still no where near as much as a panicking man and a bucket can shift... and the 12V battery would be quite a weight burden.
j./

Michael4 wrote:Having seen these at work this year I was wondering what they were. Are the something sophisticated or are they something like this running perhaps off a small motorbike battery? I'd guess that it would only really be on for 50% of the time?
..

I'm quite certain there is very little about the pumps used in the boat race that is remotely sophisticated, and often feel that for a sport that is so technical it is remarkable how slow different ideas have been to be developed.

Bow rudders were used for the first time in 2000, on the GB Gold medal winning VIII in Sydney, as was a "self moulding aerofoil fin/rudder, which has far less impact on bot speed win used particularly for more extreme steering such as might be needed in a crosswind.

Pumps and self bailers are hardly used, mainly because The Boatrace is pretty much the only race that is not cancelled in the face of more extreme conditions.

So there is almost a zero financial return from research in this field. Most rowing takes place on small (ish) rivers, and if sking conditions are encountered, well, that is not considered to be a valid situation for a "fair contest."

This has changed in the past 10 - 15 years as more rowing, particularly racing, takes place on more open water particularly with 6 lane regattas becoming the "gold standard" (in my view a very backward step) It is slightly daft that you train all year on "small water" (as we would call it) then hold the championships on open lakes. Nevertheless, the adoption of systems to bail out boat slowing water remains remarkably lacking.

Boats have also changed in their construction so where most boats @30years ago were made with wood, this has been almost completely taken over with plastic / Carbon composite construction. A wooden boat (VIII) would have an enclosed bow and stern canvas. Enough buoyancy to keep the hull afloat to be swum ashore by the crew in the unusual event of sinking, (usually the result of a collision or other mishap.)

In the event of swamping, if not sufficient to sink immediately the water would surge up and down the boat, ultimately moving to the stern and accumulating until if further water was taken on, the stern gunwhales would go below the waterline and sinking would be a certainty.

This was a certain Sinker conditions year, and in spite of having "aerofoil riggers" and Splashboards, they foundered typically at Barnes, after shipping heavily all down the Chiswick reach. Rough water will often wash down the length of the boat, pouring in all the way down, with or without splashboards and so the real art is really to avoid the rough water. 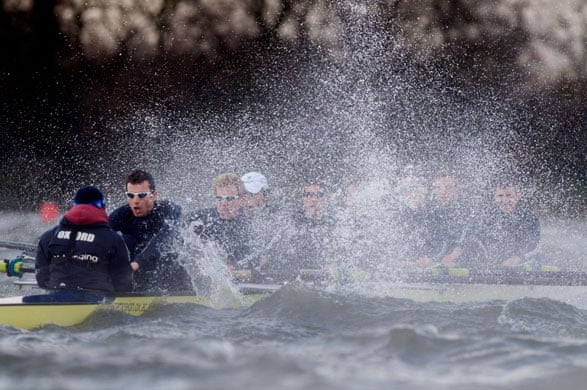 Given the importance of the race I am amazed that seemingly so little attention seems to e given to rough water tactics, and obsession about the stream means tactical steering for flatter water is mostly forgotten until it is too late, even though the rough water makes the stream a disadvantage.

By the time the boat is full enough for a pump to really work (remember these boats have not naturally got a deep bilge to act as a sump from which the pump can be primed) there is already so much water onboard that the boat is being hugely slowed down. It is soo much heavier that this saps the strength and morale of the crew. The boat floats deeper in the water and invites more water in, and the lower rig height as the boat sinks makes a clean effective stroke, never mind the timing, increasingly difficult. The waterlogged boat will also stop responding to the rudder, and must be managed by calling for bow or sternside to help the boat around.

There was a moment in the Women's race, approaching Barnes, where Oxford had cut inside onto the Cambridge water to take advantage of the flatter water, when I thought Cambridge might catch Oxford with an overlap and force them to drop astern to get out to the central arch of Barnes bridge without a foul, but unfortunately this opportunity for an exceptional test of the umpire was lost as Cambridge stayed out in the stream, shipped a lot of water, and fell further behind and that was when they sank.

Well actually they didn't,...which go's to show the limitations of the pumps, and also illustrates how the boats have changed.

At Barnes the boat was completely swamped, but still afloat enough to row slowly because a modern VIII, being a Plastic composite monocoque construction, has now got sealed buoyancy under every seat. This both stops the water surging to the back of the boat, and is sufficient to avoid sinking. BUT, when very full, the water overflows each foot well, and then flows to the back.

By paddling light for about a minute, the boat was able to float along the whole length of the boat, and the pumps could bring the hull back to buoyancy once again, so Cambridge were able to finish the race safely.

You can see here that even though the boat is totally submerged there is still enough buoyancy to carry on as the hull is still flat in the water. The stern is still afloat. Contrast this with the 1978 crew (above.)

This would NOT have been the case in the men's race if a similar thing happened because they are all @ 25% heavier, and even with a heavier specification hull, this would not have given sufficient buoyancy to let the pumps get the hull /gunwales clear.

Because the water accumulates in each footwell, I think there are 4 or more pups in each boat. The battery pack will be modern one such as would power an electric bicycle, so much more powerful and lighter than car or motorbike battery, but the pump and tubing looked no more sophisticated than what I have in my Pond for the filtration system. Quite a lot of room for improvement I would say, to allow earlier functionality when relatively dry.
Last edited by Michael Brigg on Mon Apr 11, 2016 6:04 pm, edited 1 time in total.
Michael Brigg
Top

Very interesting post, thank you Michael. Still looking for the pups in the boat, though!
Rupert
Top

Thanks for the post, most informative, I'll avoid the young dog references...and will research high powered lightweight 12 volt batteries though I fear they may not come cheap.
Tideway 206
11+
Sold the 'Something bigger and plastic', it never got used.
Top

I asked a question on the Y&Y forum a couple of days ago, why don't they have similar self bailers as we have in dinghies, a couple of high volume ones at the stern would surely weigh less and shift enough water to remain afloat?
After all its surprising how much water is shifted in a short time. Think about how much water in a wayfarer or gp after a capsize.
Hornet 191 Shoestring,
Hornet 595 Demon awaiting restoration
Hornet 610 Final Fling
Hornet 353
Top

I'd intended the idea of a pump for minor 'water ingress issues' such as leaks and maybe a little coming over the side. The pump would of course be supplemented by Tesco's excellent 'D' shaped bucket
Tideway 206
11+
Sold the 'Something bigger and plastic', it never got used.
Top

Michael, depending how long you anticipate the pump will actually be continuously running, a small "pocket size" lead-acid battery may be available at a reasonable cost.
My "kit" comprises a 350gph "Seaflow" pump drawing 1.8amps and a 2.3Ahr battery.
More than enough to empty a rain-filled rescue boat before use and to recycle bath water onto the garden in draught weather!!
The battery that I purchased some 4 years ago (although cheaper at the time) is still available.

You may require a longer running time (this package manages about one hour continuous) for which slightly larger and heavier batteries are still available at a reasonable price.

Hope this may have been helpful
Top

Thanks, it is all starting to come together in my mind.

A pump rated at 360 gph is pumping 6 gallons an minute, the equivalent of approximately three buckets

This is actually quite a lot of water when one is confining its use to dealing with leaks, light spray etc.

I'd fit it on the port side so that it would work best on the starboard tack. It would be difficult to keep the 'strum box' (?) under enough water in the centre of a boat unless quite flooded.

So I'd guess that an hour's worth of power should be enough for several hours sailing.

Might be well worth a try.
Tideway 206
11+
Sold the 'Something bigger and plastic', it never got used.
Top

Interesting thread. In my day there was a coxing handbook which did have a chapter on Tideway conditions, but that was long ago, and I was nowhere near good enough to need that chapter...

I remember thinking about fitting self bailers in the college boats, at the time. Particularly after we sank in January...

A practical limitation of Elstrom type self bailers is that whilst one might be fitted by the coxswain' feet it would not be enough to shift a lot of water, and the oarsmen would have to stop rowing to open the bailers, as one could not start with them open, for obvious reasons!
CVRDA eligible:
1962(?) Firefly F3163 "Aquarius"
1946 International Fourteen K478 "Galatea"
Not CVRDA eligible:
1991(?) Nethercot IC K229, "Ogaf the Unbearable"
Squib. possibly number 251, "Squirt"
Top
Post Reply
11 posts • Page 1 of 1