Now - tack it and sail it back the other way... Ummm..Oh Dear! What is a sailing boat anyhow? Not that VSRII has ever claimed to be a sailing boat... its only got one objective and it has certainly done that!

Are there any vintage sailing craft that were so focused on one goal, that all other aspects of sailing were discarded?
j./

For a start there's the Crossbows 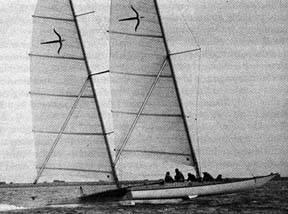 My favourite was Icarus 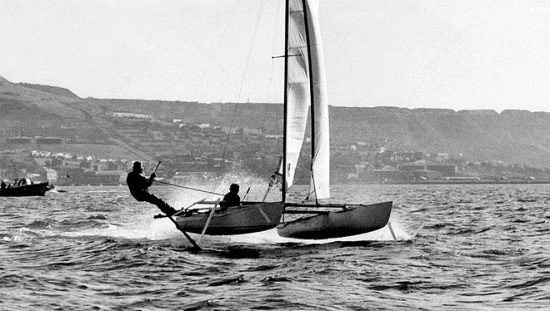 I thought Crossbow was a Proa or were there more than one.

I have been following sailrocket for some time now when they were struggling to reach 20 knots and now these phenominal speeds.

Worth looking at the website the clip of the boat taking off and somersaulting in mid air is spectacular and he walked away from it.

Its taken a while but the theory is certainly becoming a reality. Can the wind/kite surfers get anywhere near and what about Hydroptere can come close?
Hornet 191 Shoestring,
Hornet 595 Demon awaiting restoration
Hornet 610 Final Fling
Hornet 353
Top

I think there will need to be a step change in the way kites and windsurfers work to get up to these speeds - they have been adding 100th of a knot over the last few years, now we have over 10 knots added in 2 weeks. Can't see Hydroptere managing it, either, but I think they will concentrate on the long distance records, now, where 2 tacks are involved!

The original Crossbow was a proa, Crossbow 2 a cat. They are getting on for doubling her speed now, though. Yellow Pages Endeavour and her successor was pretty mad, too, from the designers of the C class cats called "Quest".
Rupert
Top

"Blue Arrow" was a bit of interest for a while... A super sized Foiling yacht rustled up in response to the Farr Super-class 120' Americas cup Challenger in 1988, and then quickly sunk by the courts to prevent it from Challenging. (The usual Courtroom drama stuff of the Americas cup)

My recall was that it suffered gear failure. It was surprisingly small by todays standards. I'm guessing it might have done better in todays enviroment of Carbon fibre.

Suggestions were thrown around of 30 knots+ but it never got above 18.

Another Cornish "fail" (that is the correct "youtube" speak I believe,) was Peter Goss and his Wave piercing Supercat. Designed for the Southern Ocean, it broke up because "The waves were too small!!"

My favourite was "Clifton Flasher". Something about the name I think....

Michael Brigg wrote:My recall was that it suffered gear failure. It was surprisingly small by todays standards. I'm guessing it might have done better in todays enviroment of Carbon fibre.

Did a bit of research on that a while back... They tried to work up a set of dimensions that would make the Americans and New Zealanders think the boat would be a slow monohull and let them play. That didn't come off, so they basically took it out for a blast in more and more breeze (designed for light airs in San Diego) until it eventually went bang. 23 knots boatspeed fairly regularly was what I heard.
Top

For the avoidance of Doubt
Crossbow 1 was a proa with one mast
Crossbow 11 was a catamaran with two masts
Crossbow 111 was/is two very long hulls still in the rafters of a boatyard in Norfolk the project was put into abeyance with the death of Rod' Mcalpine-Downie and Tim Colman being made Lord Lieutenant of Norfolk, given Sir Timothy's age it is unlikely to progress after all this time.

Tim Colman.jpg
Tim Colman in one of his sheds with Crossbow 111 hulls.
(38.17 KiB) Not downloaded yet

I'd not heard of Crossbow III - what a shame she never got on the water.
Rupert
Top
Post Reply
9 posts • Page 1 of 1