I've done something rather silly and bought a 1957 wooden enterprise as what is intended to be a "floating project".

I sailed an enterprise at school but haven't sailed since so this could be a baptism by... well...water. My partner and I have talked about learning (or re-learning in my case) to sail a dinghy for a while now and so in something of a fit spontaneity I have bought a very cheap and hopefully cheerful enterprise for her. Time will tell whether she appreciates this gift or just thinks I'm mad. I have a feeling it may be the latter.

I went to have a look at it over the weekend just gone and it all looked fairly solid if a little tired. Having previously run and restored a couple of classic cars I am under no illusion that once I start looking more closely and trying to spruce her up I am likely to find all sorts of nasties and it may get worse before it gets better.

That being the case, the plan is to pick her up, get her on the water, get a bit of use out of her before embarking on any more significant work which might spiral out of control!

Any way, I'm collecting on 6 December and enlisting the help of a friend who knows what he is doing to get her rigged and seeing what's what. I imagine I will be on here shortly afterwards asking for rather a lot of advice.

Picked the right time of the year to blow the cobwebs out.

Sounds like a great plan. Too easy to buy a boat, take it apart and never go sailing, ever. By sailing her, you'll figure out what everything does before starting work.

Welcome to our world!
Rupert
Top

I agree with Rubert. Sailing it first is a great idea. There seem to be so many "good intention" projects that just never happen so getting out there will give you inspiration. Hopefully.

I'm sure you are joining a whole unseen army of people who will spend this winter beavering away. I bought yet another OK last month which needs tlc but nothing quite so brave as a 58 year old wooden job, rather a composite one from 1984 that just needs a little refurb. I've made a start and found no nasty surprises. It came with two bags of bits and bobs and two nylon blocks ready to make new mast bearings. The seller had intended to ....etc.

So I went to collect her yesterday without too much drama. On initial inspection I was a little concerned by the rather thin and "springy" Swan neck on the trailer coupling...

However, I eventually convinced myself that it was *probably* spring steel and I would *probably* be ok towing it home. I'm fairly convinced it is a modification made a by a previous owner at some stage to raise the height of the hitch.

When I get chance I think the trailer will get a service as a priority as the wheels were displaying quite a lot of negative camber, the bearings, although not too warm at the end of journey could do with replacing and I would prefer the hitch mounted on a proper bit of box section. Oh and it needs rust proofing. But other than that its fine...

Anyway once back home and on a driveway I enlisted the help of two old friends, both of who fortunately know a lot more about boats generally than I do.

The boat came with two masts: an old spruce one and an ally one. The previosu owner recommended the spruce as being the better of the two so we set about getting this up. Three slightly achy backs later we had it up but found that, unfortunately, either the shrouds had stretched or the tensioners and shackles attached to them were wrong as they were far too long and it was impossible to get any tension in them.

In order to make a bit more progress and check everything else, we switched to the aluminium mast got this up. This also needs new tensioners but it was possible to get it up with some tension in the shrouds.

Unfortuantely the main halyard and sheave (as I now know it is called having googled) is knackered and needs replacing if I am going to use the aluminium mast.

So far so good and the jib went up fine. The sails are not in great shape but I think I will be the limiting factor rather than the quality of the sails for some time yet.

The boat came with two wooden booms. One was in good shape the other is rotten. Unfortunately the square hole (no idea of the technical name for this) on the end of the good boom is too small for the "lug" which connects it to the ally mast. I assume this boom has been used with the wooden mast before as it does fit that. The rotten boom does fit the ally mast.

My plan is just to file out the hole on the good boom slightly (there is probably less 1mm in it) which will then allow me to use the good boom with the ally mast if I want to.

Main sail went up fine and again is not in great shape and could do with a clean but at least it started looking like a boat.

Rudder and tiller all went on fine without a problem and so this was about as much as I could do without losing the light.

I've now de-rigger her again and put her away. I'm giving her to my partner for her birthday in a couple of weeks before when I need to spruce her up as best I can.

Ultimately the decks and inside needs revarnishing. Equally the hull needs repainting but as I've said before I will try and get some use out of her first and then see what's what.

All in all it could have been worse!

I'll try and put some better pictures up (particularly on some areas I would like a second opinion on when when I have time and light.
Top

JimiGT wrote: I'm giving her to my partner for her birthday in a couple of weeks before when I need to spruce her up as best I can.

I would suggest if it goes well a Dry suit for Christmas!
Michael Brigg
Top

Negative camber - is that top in, or bottom in?

Bottom in is quite common on trailers where the hubs are on the ends of a transverse leaf spring...
Matt

realnutter wrote:Negative camber - is that top in, or bottom in?

Bottom in is quite common on trailers where the hubs are on the ends of a transverse leaf spring...

I think the whole trailer needs a once over really. I'm less daunted by that than the boat though as I'm rather more handy with a welder and a socket set than I am with a wood saw and file!
Top

As a rule I never stand in my wooden boats whilst they are on dry land.

It might be that I am too fat, or that I buy some pretty decrepit old boats.

I think I've seen that bracket affair on a trailer before.
Top

Looks like a fun way to spend a few (dozen?) hours

suggest you pick up an ally boom off ebay to go with the ally mast. That way , you will still have a complete wooden set up for future use (putting wood back into the filed out hole will be difficult )

Looks great, I bought an enterprise last year to start sailing with my girlfriend. I love it and cannot wait to get back out this summer and the girlfriend also enjoys it a lot but does get a little scared sometimes. We mostly sail on the local reservoir, that way we can't get into too much trouble!

I think you will have great fun and your partner also. Mine was also red when I got her but I painted her bondi blue: 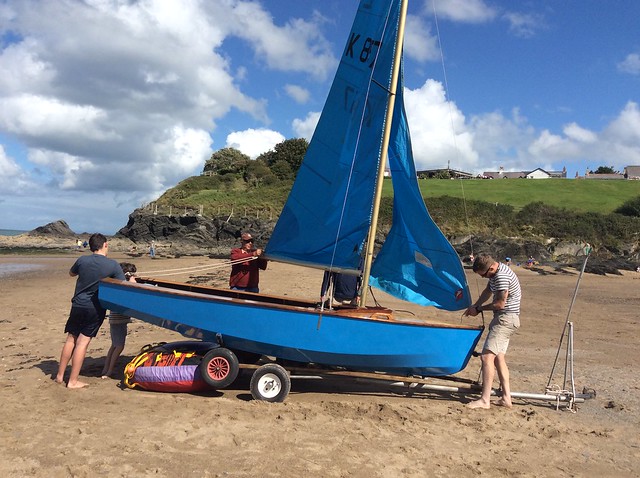 As someone who sees a lot of damaged hulls through my workshop can I also say never stand in a dinghy on a trailer!!!

Hope you and your girlfriend have a lot of fun sailing and fettling her.

Thanks for the replies and encouragment all. Regarding standing in boats on trailers - Noted!

Dan, I actually saw your thread at around the time I was looking to buy this boat. The great results you got with yours was one of the reasons I decided to go ahead!

Anyway, by way of an update, the girlfriend was very happy with the purchase but once we stated looking at her more carefully it became apparent that she did need some concerted attention to spruce her up (the boat, not the girlfriend!). In the meantime we are learning to the sail at our local club and using their hire boats.

So, despite my best intentions, the boat is off the water and we are in the process of stripping and repainting / varnishing her.

We were able to strip the decks without too much difficulty and so far we've just put one coat of varnish over the top to provide some protection whilst she's being moved about etc. We will be doing further sanding and coats on the decks once the hull is finished and she's not being turned upside down all the time!

We've now moved on to the hull which by my count seems to have been at least 4 different colours. There are a few areas which have been many many layers of paint and other areas with only a thin coat of the newest layer of paint. The result was a very uneven finish. We are now back to bare wood over most of the hull.

However, I do have some questions which i would be grateful for your advice on before I start priming and painting.

1. There are a few nicks and scratches in the wood here and there. Is there a particular wood filler you would recommend for for these?

2. In one or two small areas it does appear that the last person to sand the boat back has taken the wood back slightly too far and so has gone through the top layer of lamination (I'm not sure if this the right description - see the photo below to see what I mean). These are in the areas where there was only a very thin coat of paint. I have sanded the paint away from these areas by hand using high grit papers so as to avoid taking any more wood away. Do I need to worry about this and is there anything I can / should do to improve matters?

3. There appears to be a bead of some form of sealant between the panels of the hull. In some places this bead looks to be in failry bad condition and has "crumbled away" in places (see the photo below for what I mean). Is this something I should be repairing / replacing, if so what with?