Off topic 'what is that?'

trebor wrote:This may be a urban myth, but I understood most Ladas were exported back to Russia.

I had 4 of the darn things one for over 4 years and made money on every one. 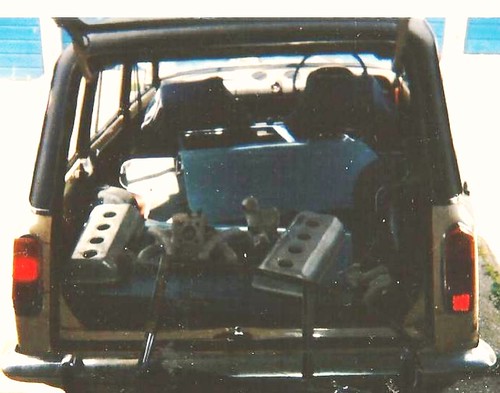 Rupert is right about the built in steering slop but I actually raced a couple of them.

This old estate acquired for £75 (yep know I was done, heard all the jokes wore out the T Shirts, carrying some Daimler V8 semi Hemi engine bits

Well Ed
You really will be busy fighting the tin worm. Time to invest in a welding rig. I had one once only two years old when I brought it, loved the engine but the depreciation was incredible. Sold it once it needed work (welding), doing to it and brought another Mini Cooper S a real one not a baby BMW one.
Have fun but be prepared to have to do a lot of work on it just to keep it a going concern.
Best of luck with it.
Al
Top

So may one enquire to whom does the Guilietta Sprint in the background belong?
Top

That Blue Guilietta Sprint belongs to my nephew. Is working, MOTed, and being used. My brother rebuilt it and is currently working on another red one which has just arrived over from the USA. Looks damned near perfect, but bottom is totally rusted to non-existence. 3 motors have been stitched together to build new one, which hopefully should be OK, but not yet fitted. Shell is currently on a rotisserie for lots and lots of welding. He bought his first Guilietta when he was 21. He bought this one for his 71st. Don't know how long it will take, but progress on his Hotchkiss and the Model T seems to have slowed down

I wonder if the Vintage Motor Car Club has a vintage dinghy wing?

An event would be fun though.

I fear my classic vintage racing dinghy trailer is heavier than my Austin...
Tideway 206
11+
Sold the 'Something bigger and plastic', it never got used.
Top

You'd have to hold the meeting spread over all the lay-bys 5 miles from each member's house, via Skype.
Rupert
Top

Rupert wrote:Just 9 Lada Riva 1.5 estates left actually driving. Loved that car. Especially loved how when bombing down the motorway you could turn the steering wheel quite a long way before the car actually noticed!

Ours did the same. Also, I once had to do an emergency stop. The problem was that ever after, the car pulled to the left all he time. Never managed to fix that.

It did actually tow boats quite well though! It was so heavy the extra drag of the boat made no difference!
j./

And it could do a ton, while towing. Not that I ever did, of course... Different times...
Rupert
Top

I had 4 Ladas and they all had a rear brake compensator which could actually cause a lockup.
Ihad two 1200s one for over 4 years, and raced both , the day before I was due to exchange it for a Brand new Nissan Bluebird I had an off and hit a stack of pallets, which left some scores that wouldn't T Cut out.
I cam clean to the Nissan manager and he said thanks but don't worry, as they still gave me £1300 pounds. I bought it for £950 when it was 3 years young.
After redundancy at 40 from Tesco and unemployment lingering longer than a previous Redundancy I sold my 4 year old Nissan went back to the dealership asking if they had any cheap cars. The salesperson offered me a private sale Sierra for 900 pounds but I said no I really mean a very cheap car so was directed to the Workshop manager who sold me his daughter's Lada for the cost of its recent new battery, I knew the tester at a nearby testing centre and he advised me it had a small hole underneath but as it wasn't structural it qualified for an MOT.
Then I got a 1500 Estate, from a garage near me and sold the 1600 saloon for a small profit, then found another Security job . Through all that time I was rebuilding a Ford Thunderbird so that gave priority to having less shed like vehicles.
100MPH sorry no way, (I saw a somewhat blue haze 90 in the plush 1600 with the oil light flashing )unless it was dropped from a 747 at 45,000 feet.
However the things were so darned tough iprobably would have survived it.

Next up I got a Leyland Maxi 1750 and after changing the servo, I ran that for over 4 years.

Talking Classics I think the cars and boats go hand in hand, for instance my Viva HB is a year younger than my Minisail Sprit
Just bought me a quirky little sports car called Reliant Scimitar SS1, not a Del Boy type Regal Van , or GTe breadvan type V6 powered Classic heavily favoured by the then Princes Anne.
Her Father a very keen sailor" how dare one call water on one, ones wife owns the bl**dy water, he had, maybe has an estate car which was originally a promotion vehicle, for Triplex glass and Designed by David Ogle.
I had a Daimler Jag V8 which had the same engine as an SP250 Dart, which Ogle rebodied and was effectively the same bar engine as the first Scimitar Coupes which started out with Raymond May headed Zephyr straight six engine.
After the Essex V6 was introduced on the big Mark 1V Fords , Scimitar Coupes could be had in 2.5, 3 Litre guises, but it was the former six that powered HHHs Triplex Estate.
Anyway being a lightweight open 2 seater my Reliant looks I think rather like the equatic car Sir Richard Branson piloted to a new cross channel record.
Pass me the epoxy resin and waterproof filler please.

Reminds me of the classic Top Gear Episode where they made amphibious cars....

Yep RN but that pic I did was done well before TG.

I had the more powerful Vitesse 2 Litre,basically the same body as Captain Slow's Triumph, not hisTriumph t'was a near disaster,but the Triumph car.

Trevor,I think the Bond Equipe 1300 and later 2 Litre were all Triumph based, so had the seperate Chassis. The 1300 had a Spitfire engine, in Coupe form only and the second edition had twin headlights similar to the first 2000's *ones.
The 1967 Bond Eqipe 2 litre, also had the Vitesse GT6 engine which came out of the Unit construction Triumph 2000 *Saloon.

The earlier Sports Six engine came out of the pre Michelloti styled 2000' Standard Vanguard Vignale Six, sleeved down to 1600 cc.

I was sorely tempted to buy a nice example of one off EBay, however the plastic fantastic, SS1 was a third of the Buy it now price anyway.

There is a Vitesse convertible for sale right now with the 2.5 PI engine, based again on the 2000 six,a popular conversion, however the 2 litre was enough of a handful as Dougal and yours truly have discussed elsewhere.

Fairphorpe's last rendering had one,as did the Trident Tycoon, which also had V6 and V8 models, the Ventura and Clipper, on a TR6 Chassis.
That was originally an Alloy Fissore bodied car, on a lengthened TVR Griffith chassis with bodywork designed or Styled, by Trevorre Fiorre(real name Trevor Frost) and he was responsible for the first 2 Litre Bond Equipe Coupe.

The Scimitar SS1 is actually mainly polypropylene bodied and on a backbone Chassis like a Lotus Elan one even to the extent of having semi trailing arm suspension.

By the time of the 'Small Sports'Scimitar, Reliant owned Bond, so maybe why you thought they were Equipe based.

After the demise of the Herald /Vitesse (the Mark 4 GT6 lived on another 4 years)Bond dropped the Equipe, which was available in Convertible as well as Coupe form from the introduction of Mark 2, in 1968 till 1971.

Another car I had been tempted by before, was an Equipe made into a sort of Scimitar GTE, by tacking on the roof from a Herald Estate, instead I had bought my Viva HB.
P
The engine in the little Scimitar is from the front wheel drive Escort 1600 CVH but I am not sure if the five speed gearbox is, as it is connected to the rear wheels driving through a prop shaft, but maybe and pretty sure of it it has an adaptor plate to make that possible.
Last edited by GAv on Sun Mar 06, 2016 2:20 am, edited 5 times in total.
Top
Post Reply
32 posts