To avoid hijacking David's Proctor thread, I post a picture of the boat I learnt to sail in. Down 'ere they be called scows. 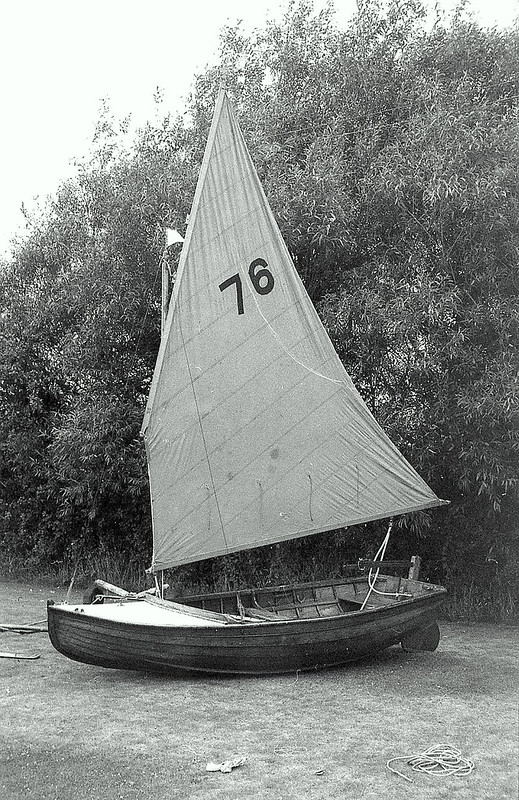 Apparently the South Coast type can be identified by shape of bow but I know not how. I think this was a Bembridge one? And aren't there barges called scows just to help matters further.

We await a definition!
Tideway 206
11+
Sold the 'Something bigger and plastic', it never got used.
Top

Ha, if I is a definitive answer you're looking for, then you'll have fun getting one.

I'll get the pdf of the article and will post it, which will give an insight into how scows came into being, but that won't answer the question either. The Lymington Scow that begat all the other Solent Scows is far closer to a conventional dinghy.....

In the end, the blunt bowed scow hull form pretty much got overtaken by the skiff revolution, but that is not to say that someone won't come up with a new take on the shape - stranger things have happened

There are problems with the word skiff too...

Wiktionary has skiff as

1. small flat bottomed boat with flat transom, and vertical stem
2. Any small boat that can be handled by one person..

So all dinghies are skiffs, not just the modern fast ones that get called skiffs... And a Minisail, British Moth etc is a skiff too!


Wiktionary is clearer on scow... square ends a must!
Matt

I'm sorry but NO! There were definitions in place long before the Wiki version, with many of these having a great deal more in the way of background and credibility.

When the Skiff 'revolution' took place there was a great deal of discussion about what was a 'skiff' - I remember that the German Contender website include the word skiff in the title. Then you had the Topper range of boats from the Iso to the Boss - the question was then one of "were these skiffs?".

I spent a lot of time on this for the article (there is nothing like going into print to bring out the alternative views) and the onlything that one can say with any degree of certainty is that it will mean what you want it to mean. You can have a scow with a pointed end or a blunt one and it is still a scow. And as for a Skiff - is the Wiki saying that the 49er isn't a skiff? I would have to counsel that that sounds something of a minority view to me!

Personally - I like the scow shape - the blunt ended ones, all the more so after finding that Peter Milne had help with the Fireball hull shape......

These words have been used in the world of boats in various languages for a long, long time. All this discussion boils down to is whether we use historical or current usage, and what current usage is in different parts of the world.

What I love about scows in the Fireball or Minisail sense is the stability and speed you can get from a simple, narrow hull shape. The Foiling scow is certainly something that could catch on - stable when moving slowly, so making it more attainable for mortals, but low freeboard would reduce windage when flying.
Rupert
Top

I always think when people say
"Skiff" a boat with no Transom.
"Scow" a boat with roundish foredeck, fairly flat hull.
"Pram" a boat with flat section on front.
Their are probably designs featuring all these three features and any combination of other types.
Robert
Minisprint 4230
Tinker Traveller 160
Mirror 61147 Anastasia
http://www.aquabatdinghy.co.uk
Top