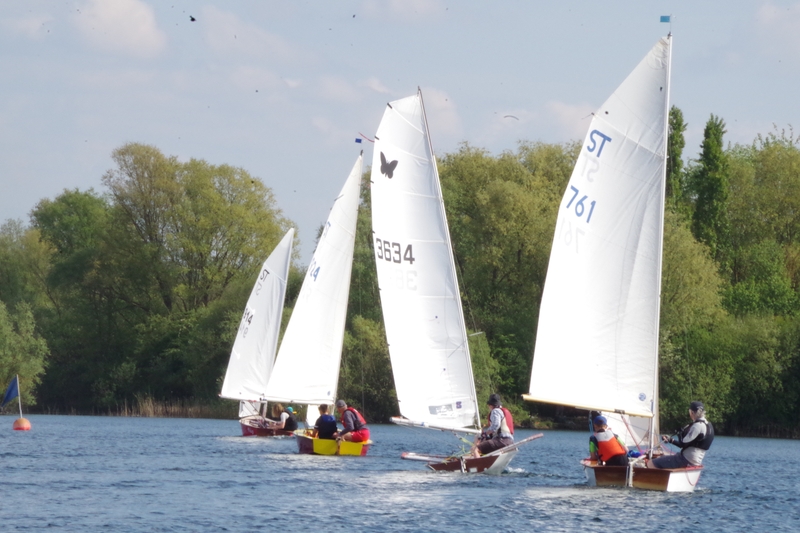 Saturday dawned bright and sunny, however, as we looked out over a glassy calm lake one key ingredient seemed to be lacking….where is the wind? After a short delay waiting for the wind to materialise so that a course could be set, the Race Officer eventually got things underway.  The 11 boat CVRDA fleet were joined on the start-line by 5 Signets who had come to Hunts for their one day open.

Due to the extremely light and variable wind the course was a simple trapezium in order to keep the laps fairly short. With zephyrs coming from all corners of the lake at times, a great deal of concentration was needed to keep the boats moving in the right direction. This seemed to benefit the single handers, as they were able to react more quickly to every little change in breeze. The faster boats struggled to break away from the pack as everything seemed to be drifting along at much the same speed.

Hunts local Gary Tomkins in his traditionally rigged British Moth won this first race with Ian Marshall’s International Moth in second and Abby Freely, also from the home club, taking third in the Minisprint. This set the pattern for the day, with the shifting wind never rising much above 6 knots and the dead patches making it a game of snakes and ladders depending where you were at any given time. Gary was second behind Ian in race 2 with Roger Oliva-Knight gaining a well-deserved third in his newly acquired Mirror. Roger sailed another brilliant race to take the win in the last race of the day, with Ian second and Will Deutsch in the Finn taking third.  Unfortunately for Gary he was OCS in race 3, which meant that he slipped to second overall after day one behind Ian, with Roger one point behind in third.  Abby’s third place in race one kept her in fourth overall, ahead of Sam Barker who scored a very consistent string of fourth places in his Warlock design International Moth.

The evening got off to a good start with a complimentary drink followed by a very tricky team quiz and what seemed like an unlimited supply of Pizza which was very popular. The quiz was eventually won by the CVRDA visitors’ “Love of Knitting” team in spite of their team name being the wrong answer to one of the first clues.

Sunday morning saw the addition of three more CVRDA boats to the fleet, with the arrival of Tim and Pat in Merlin 1066 and Lyndon Beasley in another Shelley Moth, plus Nessa’s beautiful 14 was being rigged in the boatpark by Jon Cowper and Paul Jefferies.  As an added incentive, the double handed boats were also competing for the Mike Liggett Memorial trophy as part of Sunday’s racing.

The first race of the day was a one-hour pursuit race with the Mirror starting first and the International 14 starting some 16 minutes later, with everything else at intervals in between. The timing seemed to catch a few people out and some boats started early while others were late, although in Sam Barker’s case the lateness was due to him going back to the shore for a bit of fiddling with his prodder! With a cool breeze that was quite fresh at times there was enough action to keep the safety boat crew on their toes resulting in at least one boat requiring some assistance.

The handicaps all seemed to workout fairly well with places changing right up to the end, with Jon and Paul in the 14 taking a narrow win from Ian in the Moth. Roger did well to hang on to third spot keeping the rest of the chasing pack at bay whilst Lyndon was not far behind in fourth place, just ahead of Tim and Pat in Merlin 1066.

The second race was sailed in similar lively conditions with the course pivoted round to give a better set of beats and reduce conflict with the club racing. Roger’s Mirror, which had never previously been raced since being built by its previous owner, was forced to retire when the rudder downhaul pulled out, which left the Moths of Lyndon and Ian to fight for the win. The 14 took line honours just 20 seconds ahead of Ian’s Shelley, but dropped to third on Handicap behind the two Moths. Tim and Pat took fourth spot, which meant that barring a disaster in the last race Jon and Paul had all but secured the Mike Liggett Memorial Trophy.

The last race was held in a dying breeze which resulted in a tight battle at the head of the fleet between Ian in the Moth and Jon and Paul in the 14. Ian managed to fend off the 14 until the very last lap when Jon managed to gain an inside overlap on the run to the final mark which enabled them to cross the line one second ahead at the finish. Ian won this race on handicap which also gave him overall victory and the 14 ended up tied for second place with Will Deutsch in the Finn who had clearly left his best race till last. Roger suffered another unfortunate setback when his tiller extension parted company with the tiller, however, he battled bravely on without it and managed to finish a creditable sixth on handicap which was enough to secure second place overall ahead of Gary in the British Moth.

It was great to see “Aggie” on the water again even though at times I had a closer view of her than I would like! I think it was quite fitting that she won the Mike Liggett trophy in the capable hands of Jon and Paul.

As usual Hunts did a great job in hosting another successful rally so a big thank you to all those involved in making it happen. Particular thanks must go to John the Race Officer and his team who did a great job getting all the races in, especially in the almost windless conditions experienced on Saturday.