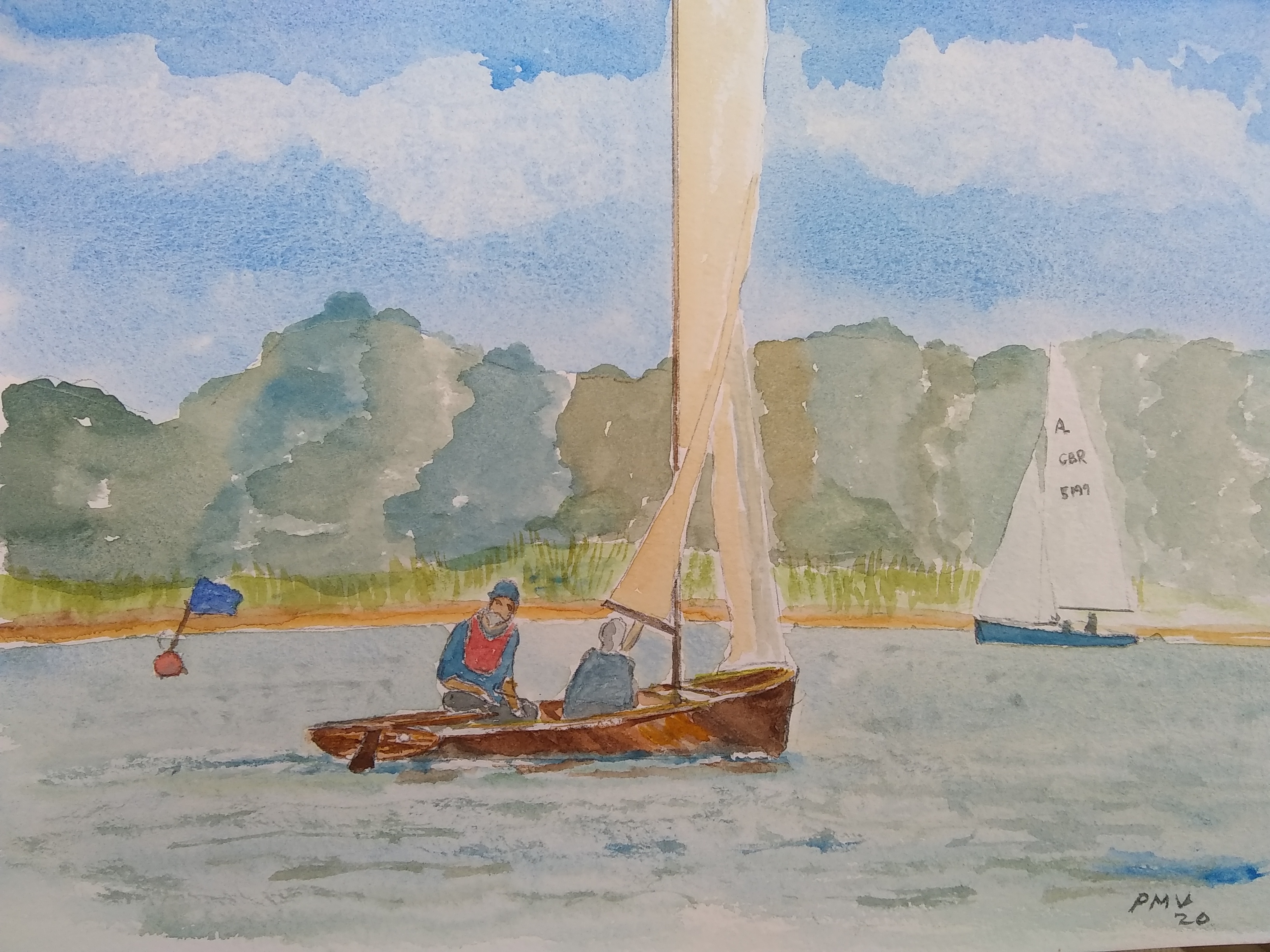 Peter Vinton has been gazing into a crystal ball to a future CVRDA event and produced this report:

After the recent lock down it was good to get back out on the water for the CVRDA rally at Hunts.  There was a good turnout which was significantly boosted because Nessa had used the recent lock down to get all her boats sorted out, and all were sailed by cadet members from Hunts, adding 17 odd assorted craft to the entry. Nessa sailed her most recent eBay purchase which had everyone guessing, but she assured us it was a little known Sploog, a singlehander from Germany and dating from 1968.  The rally was meant to be a classic Merlin event too but they had all spent the lock down removing the thwarts from their wooden boats and building them into modern carbon hulls so that they could keep their vintage handicaps. They were on track to complete their boats in time but unfortunately a delay in a shipment of titanium to Harken meant none if them could get their fittings in time.

After bacon rolls and coffee then rigging of boats the first race got underway.  Unfortunately Pat and Sandy missed this race as they were still putting the mast up as the race started, despite having arrived on Thursday morning to be ready on time.  Lyndon and Ian, as usual were straight into the lead off the start line in their Moths, with Alan Watson in his Magnum Moth and Keith Rollinson in his Pegasus in close pursuit.  Unfortunately there was confusion at the first mark, Alan loudly protesting that Ian and Lyndon had gone round it the wrong way then capsizing in front of the Pegasus, then the splash as Alan fell in put out Keith’s pipe so he had to retire to shore to relight it.  Nessa in her Sploog sailed neatly round the outside of the melee and then, despite having persuaded the CVRDA handicap committee that a Sploog was the same handicap as a classic Optimist, shot past the two Moths into a lead which she maintained to the finish.

True to form, lunch was a lavish affair.  Keith, Geoff and Peter, all Finn sailors ate seconds of the pies expecting stronger winds in the afternoon whilst Lyndon, Ian and Alan looked on enviously.

Fortunately there were plenty of other choices to feed the rest of the fleet.  Suitably refreshed two races were sailed in the afternoon.

However the first of these races will long be remembered for its carnage.  All was going well until the leaders were approaching the first mark when a strong squall struck.  The first indication was when all 11 of Nessa’s Moths, sailed by club cadets, capsized in unison and turned upside down.  The most spectacular sight though was when Roger tried to bear away around the mark in his planked Hornet, with Ian in his Moth just outside him.  As the gust struck, the end of Roger’s plank caught the Moth, tipping Ian out and then threw the little Moth over the Hornet, luckily to land just beyond the Hornet’s mast but just in front of Alan’s Moth, who was heard swearing in a loud voice as he capsized to avoid it.

Whilst the rescue boats finished laughing and then hurried to help the stricken crews, Peter, Keith and Geoff in their Finns planed away into an unassailable lead.  That is until Geoff, enjoying the reach so much, tacked around at the next mark and reached back the way he’d come, and continued to reach to and fro with a big grin on his face until the race ended. The last race was only for the surviving few, with no Moths left able to sail,  a short race was held in a stable but strong breeze.  Afterwards a very fine tea was consumed while Pat calculated the results.  At the prize giving the winner was announced as 6 year old Aimee from the home club, who had sailed very well with her Dad crewing  in a Cadet. Despite finishing each race well after the rest of the fleet she benefitted from the handicap adjustments for wooden mast and cotton sails.  Nessa had only bought the boat on on eBay for £3 the week before.  Second was Nessa’s Ploog, whilst the handicap committee re-consider the Ploog’s handicap.