A popular event combining with the classic Finn nationals and lowrider Moths.

Just as with Hunts SC a month earlier, Roadford Lake SC built further on the successful format of hosting an ‘umbrella’ Classic Dinghy event, then running a number of sub-series underneath this.

Located down on the North Devon/Cornwall border, the Roadford Classic Dinghy Fest disproved the current view that people are no longer prepared to travel, for with an open and wide expanse of water, easy launching, ample well sorted on site camping and the warmest of welcomes, this was the best attended classic event this season. The other populist view is that many sailors decide to travel/not travel on the basis of the weather forecasts, yet even though all the signs were that it would be a wet and windy weekend, all of the expected boats were seen to be launching, even though the breeze was already officially ‘full on’.

The slick Race Team had set a short first beat, then a square beam reach right across the lake, before a long run took the fleet northwards up the length of the lake. At the bottom of the course was another thrilling square reach, for this far up the lake the wind was at its strongest, making the beat back up to the start/finish line testing indeed! The first race Saturday lunchtime set the tone for the week as a whole, as Martin Hughes, in his immaculate Fairy Finn, sporting number 32, reached the windward mark first, before taking off down the reach in a cloud of spray. Behind him, the leading lowrider Moths bore away onto the reach, just as a very large gust hit the top of the course. As other boats capsized or just rounded up with sails flogging, the Moths wobbled, nosedived, then, simply took off! No foils, but that didn’t appear to stop them reaching take off speeds… before Ian Marshall piled his Magnum 6 into the lake in a high speed gybe.

Having started together, the fleet quickly settled into its three constituent parts the Finns had their own race, with Martin Hughes sailing a superb race clear ahead of the chasing pack. In the Moths, Lyndon Beasley was driving his Magnum 8 very hard indeed, as after recovering from his capsize Ian Marshall (Magnum 6) was chasing hard. In the core classic fleet, it was hard going, as many of the boats present were old enough to question being so hard pressed in the conditions. Given that the oldest boat present was a 78 year old National 12, not to mention Solo number 70 and Mirror 32, these elderly boats were still proving that they could make it around the race course in fine order. Fairey Jollyboats, Merlin Rockets, an Albacore, Wayfarer, Enterprise, Signet and Wineglass all enjoyed their time out afloat. Races 2 and 3 looked to be straight forward re-runs of the opening heat, with Beasley and Marshall hotly contesting the Moth event, meanwhile Alan Watson was finding the more rockered hull on his Magnum 7 (designed for a Swiss lake Championships) a real handful in the conditions. Meanwhile, in the Finns, Hughes put his dominance at risk following a capsize at the gybe mark, while he was in the water the chasing pack of Peter Blick, Simon Moss and John Barnes quickly moved into the leading positions.

Once ashore, it was time for the complimentary BBQ, fuelled by free cider, with there being something of a rush to get to the food before the Finn fleet (by those who had seen the Finn BBQ the night before, when a considerable amount of food and alcohol was being consumed!) Again, the cheerful Roadford Team served everyone, with the evening managing to survive a short thundery shower!

With 3 more races scheduled for the Sunday, there was some concern that if anything, it was even windier than the day before, with the gusts now strong enough to blow boats in along the reach. The Race Team responded to the conditions by taking out the run and making the course into a deep triangle, but even so the rescue boats were kept busy. It was sad to see the Nat 12, number 33, dating from 1936, being shepherded back in with a 2ft split in the spruce mast, but hopefully this can be repaired. Meanwhile, one of the Jollyboats won applause for completing the last lap despite a broken rudder, but the sight of the weekend was the Signet. Not known for their offwind prowess, this small boat got caught by a massive gust at the windward mark and planed at an impressive speed almost the whole length of the top reach, but in complete control!

At long last it looked as if Ian Marshall had gained the upper hand in his battle with Lyndon Beasley, Magnum 6 v Magnum 8. But, with just the last beat to go, Marshall got caught on the wrong side of a shift and was left having to tack for the line, Beasley though had seized the opportunity and just managed to shave his way across at the outer end to grab ‘line honours’. 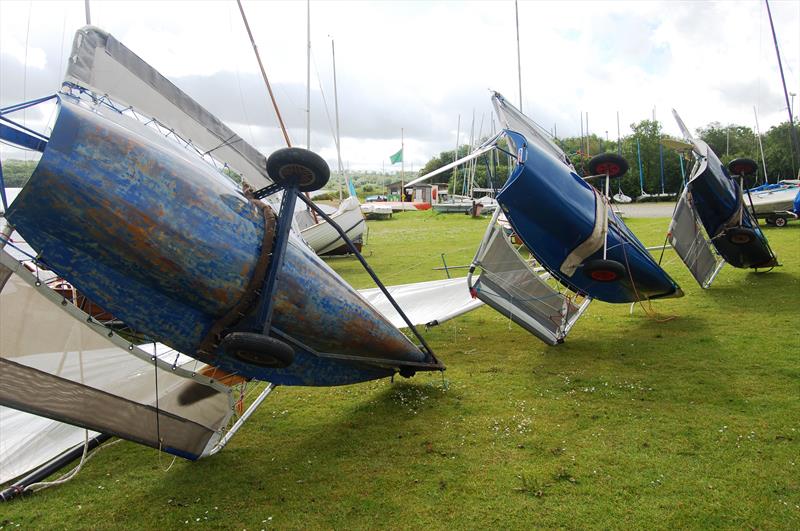 A medley of Magnum Moths, showing the development from the 8, through the 7 to the 6 during the Classic Dinghy Fest at Roadford Lake – photo © David Henshall

In the Finns, Martin Hughes always looked to be comfortable in the conditions, with his flatter sail from Banks Sails looking to be helping him to a clear boatspeed advantage. But Peter Blick was always there behind him and when Hughes got caught OCS in Race 6, the results could have been stood on their head. Just in time, Hughes realised his error, sailed back and restarted. Had he not done so and been disqualified, he would have missed out on what would be a hugely deserved victory. 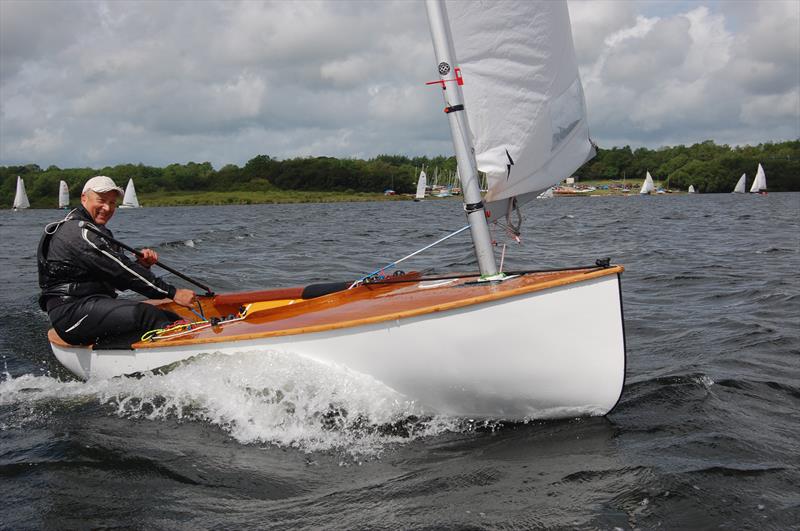 As it was, he set about clawing his way back through the fleet and by hiking harder, for longer, he was able to regain his usual position and round off a highly successful weekend. Peter Blick, who had been a Finn sailor on and off for 40 years was second, Simon Moss, with just 18 months in the fleet took third despite missing one race whilst washing the Keyhaven salt out of his boat at he gybe mark.

In the lowrider Moths it was a victory for the Magnum 8 of Lyndon Beasley, who maintained his advantage over Ian Marshall, but the performance of these two are a clear indicator that these early days of the classic moth revival are a sign of much more to come.

Overall, Roadford Lake SC is to be congratulated for running a highly enjoyable, quality weekend. If the Club can complete the deal for a lakeside clubhouse, this small but friendly club could well become a very attractive and popular event location in the South West. Once again, the classic scene has shown that their core idea, of putting the fun back into racing, does not have to be at the expense of the quality of the competition, for in the Finns, Moths and Classics, there were closely fought battles going on all weekend through the three fleets.