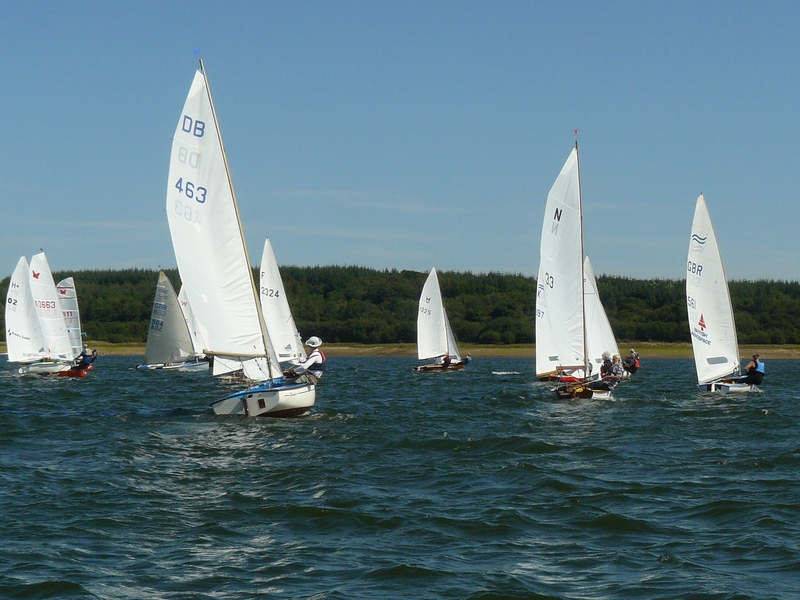 Ed Bremner organised a splendid occasion in the glorious Devon countryside. He kicked off with a treasure hunt taking the dinghies around the Lake giving everyone a chance to learn its layout, wind shifts and foibles. And if some of the clues were a little obscure, that’s Ed, and added to the fun.  The Firefly won with Rupert Whelan aboard; Pete Vinton’s Finn was second (by the odd point).

To mix it up and give the slower boats a chance a bang and return race followed the next day.  The fleet played fair and the two mighty 17ft 6in Ospreys of Mike and Ros which sailed furthest couldn’t quite make up the ground and the 8ft Puffin of Pippa Whelan zoomed downwind to collect the line honours, followed by Katie in the Europe and Jon Rawson, singlehanding the YW Dayboat who beat Ros’s Osprey by a foredeck length.

On Saturday afternoon the racing dinghies lined up to, well, race. And race they did in the increasingly challenging conditions with heavy unpredictable gusts and deceptive lulls.  If some of the vintage old bones protested the dinghies themselves didn’t and stormed round the course.  Julian & Melanie’s sixties Wayfarer (which must want to be an Osprey when it grows up) sailed way above handicap and followed the Ospreys of the Downs and Murrays at the top of the fleet like a child trailing it’s teenage siblings. These were followed by Activ8,  the Magnum 8  Moth of Paul Hignett and the Finns and Moths.  On handicap Julian and Melanie’s Wayfarer took it from the Down’s Osprey, while Peter Vinton’s Finn Django took 3rd slot.

In the windier race, the on water leaders were the same but the Stockholm Sprite design Moth of Lyndon Beasley showed blistering upwind speed to come 3rd, while the lightweight Peter Vinton sailed well in the Fairey Finn with a wooden mast to take 2nd behind the ever fast Wayfarer.  Mid fleet the Finns of Gary Phare, Geoff Hopkins and Vanessa Weedon-Jones swapped places while the Osprey of the Murrays (4th) pipped the Downs’ (5th).

The CVRDA AGM on Saturday evening voted to extend the welcome to more boats – those designed before 1965 and built before 1990 (previously rule was before 1985). This was followed by an excellent championship dinner with a “black tie with a camping twist” theme.

The following day was lighter fluky wind bringing new dinghies to the leader board – the Mirror of Roger Oliva-Knight who won race three.  Ian Marshall in his Shelley Moth came to the fore with a 2nd and the Murrays’ Osprey 3rd.   In the last race of the day the four International Moths had it with a clean sweep at the top:- Paul Hignett 1st in his Magnum 8, the Shelley of Ian Marshall 2nd; Lyndon Beasley’s Stockholm Sprite 3rd and remarkably Alan Watson from last to 4th in his Magnum 8.  (Although his knee saving stand up style was criticised for rocking and rolling).

The classic Firefly Saskia lifted her skirts, showing the usual suspects the way home and won the Monday race in super light wind. This took Rupert Whelan and Saskia (who won the first rally twenty years ago) to 7th overall.

Overall Neeno the Wayfarer with Julian Smith and Melanie Hardman won the rally and the Old Wing prize whilst Little  More did a lot more and took Ian Marshall to 2nd overall and won the International Moth trophy, whilst Django triumphed over Paul Hignett’s Activ8 Moth by a single point making Peter Vinton’s Finn 3rd overall and winner of the Classic Wing.

The Vintage Wing prize was won by the oldest dinghy present, an Uffa King design National 12 built in 1936, resplendent in ribs and copper fastenings and sailed by brothers John and Neil Wylie.

The all-important Concourse d’Elegance was easily won by the beautifully restored Osprey Supernova of the Murrays (best on land), the Wayfarer (best on water) and Pippa’s Puffin (adorned with cute dog) won boat everyone would most like to take home.

The Wingnut for acts of gross stupidity or incompetence went to Andy Hayes in his Pegasus for two things – firstly for jumping out of the boat despite being told to wait until it was shallower and secondly for forgetting to attach a forestay when the jib was removed and nearly losing the mast!

The travellers’ series for the preceding twelve months was won by Lyndon Beasley whilst the prize for the most travelling went to newcomer Roger Oliva-Knight and his Mirror.

The prize giving tea was prepared by the two Izzies. Ed Bremner gave an informative resume of the CVRDA history and progress and reminded everyone that the CVRDA is about the boats and sailing them.

Modestly Ed forgot to mention the interest in classic dinghies he has created. He provided a home for forgotten and lost classes such as the Pegasus; Mercury and Harrier; kick started Minisail and classic Finn fleets and the International Moth Lowriders, as well as providing a thumping good bank holiday.

Over the weekend of 24th to 26th August Ed Bremner, a founder member and president of the CVRDA, organised the 20th anniversary rally at Roadford Lake, between Okehampton and Launceston.

In glorious weather a wide range of dinghies arrived to celebrate the work of CVRDA over the years in encouraging the sailing of classic racing dinghies.  The oldest boat was N33, a National 12 from 1936.  Classic Finns and Lowrider International Moths attended in good numbers in recognition of the work CVRDA have done over the years in encouraging these fleets and among the others were Ospreys, Firefly, Pegasus, Mercury, Harrier, Merlin, Wayfarer, Dayboat and Puffin.  How many would you have recognised?

The event started on Friday with a treasure hunt taking in most of the lake with a picnic halfway.

On Saturday a ‘totally pointless’ bang and back race was held round a square course.  As the leaders approached the last mark a gun was fired and everyone turned round and retraced their course back to the start.  This race was won by Pippa Whelan in her favourite boat, her Prout Puffin, despite having rather outgrown it!

After lunch the first championship races started with 2 races sailed back to back.  By now the wind had really risen and gusts of over 20 knots were recorded, causing several casualties among the fleet.  However a pattern quickly emerged of the 2 Ospreys of Mike and Pam Murray and Ros and David Downs out in front, followed some way behind by a boat which looked rather like a wannabe mini Osprey, but which was in fact a borrowed Wayfarer being sailed very well by Julian Smith and Mel Hardman.  Somewhere between them was the Moth being expertly sailed by Paul Hignett leading a collection of Moths and then a fleet of Classic Finns with Peter Vinton’s wooden mast on Django creaking under the strain but keeping in among the other more modern sisters.  In the evening a tired bunch of sailors gathered for a ‘black tie with a camping twist’ dinner with a wide collection of strange interpretations of the theme.

On Sunday the winds were extremely light and shifty, giving the whole fleet of survivors and repaired boats a taxing time.  Out in front were the same suspects for one race in the morning and another in the afternoon.  After racing the annual ‘Concours d’elegance’ was held with Simon Montague’s Wayfarer being voted the best looking boat on the water, Mike and Pam Murray’s Osprey ‘Supernova’ best looking boat on land and Pippa Whelan’s Puffin the boat most would like to take home, mainly I suspect because it could fit inside any of the other boats.

On Monday morning the lake looked calm and glassy, with a race seeming extremely unlikely but the fleet put out from the shore without much enthusiasm.  However a light breeze appeared, the fleet set off and soon the leading bunch had completed a lap and were sent round again while the rest of the fleet were struggling for breeze, and were finished after one lap.

A cream tea and prize giving was held in the afternoon before everyone dispersed, with a reflection by Ed Bremner on the aims of CVRDA and how it had developed, and we were reminded that although we race old boats it really is about the boats rather than the results, getting old boats out on the water and enjoying them.

After the handicaps were applied, based on 1965 PY numbers and adjusted to reflect originality or modernisation, Wayfarer Neeno sailed by Julian and Mel was first in the old wing, Finn Django sailed by Peter Vinton was first in the Classic wing and National 12 Two Horses sailed by Julian and Neil Wylie won the Vintage fleet.  Little More, a Shelley design International Moth sailed by Ian Marshall won the Moth fleet and Pegasus Sizzle sailed by Andy Hayes won the very important ‘more behind than in front’ prize as well as the Wingnut for acts of gross stupidity or incompetence.